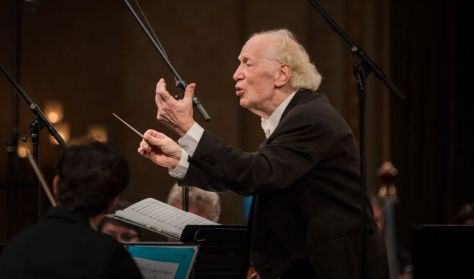 The Hungarian National Philharmonic Orchestra is celebrating its centenary. The orchestra began its life under another name, the Metropolitan Orchestra, in 1923. Its current name is synonymous with the artist who put the orchestra on a new footing a quarter of a century ago: Zoltán Kocsis.  more

The celebration’s glamour will be provided by the music of Dohnányi, Liszt and Bartók. János Kovács and György Vashegyi, two of the most prestigious conductors in Hungary, will lead the musicians, and in Dezső Ránki, we can look forward to a world class soloist who has been a regular guest of the Hungarian National Philharmonic Orchestra for more than half its 100 years of concert performances.

The concert will celebrate not just the orchestra’s birthday, but also Dohnányi’s Festival Overture, as the piece is also 100 years old: it was premiered on the 50th anniversary of the unification of Pest, Buda and Óbuda alongside Kodály’s Psalmus and Bartók’s Dance Suite. Liszt laboured on his Piano Concerto No. 2 in A major for more than 20 years, from 1839 to 1861. The work was based on the idea of thematic metamorphosis and constitutes a single, connected movement, divided into six sections. Beethoven’s innovatively spirited Eisenstadt Mass is powerfully linked to Hungarian musical history, as the great composer who brought Viennese Classicism to its climax wrote the piece in 1807 based on a commission from Prince Nikolaus Esterházy II for his wife’s name day.
Dezső Ránki (b. 1951) launched his career with an acclaimed victory in the International Robert Schumann Competition in Zwickau in 1968. For more than half a century, the world-famous musician has interpreted the masterpieces of Haydn, Mozart, Beethoven, Schubert, Chopin, Schumann, Debussy, Ravel, Bartók and many others with impeccable perfection. The music of Liszt holds a special place in his repertoire. János Kovács (b. 1951), who has enjoyed an enduring relationship with the Hungarian National Philharmonic Orchestra, is one of the most sought-after, knowledgeable and experienced conductors in Hungary, though he is also famous for his exceptional artistic humility and empathy towards his musical partners. Although György Vashegyi is best known to the concert audience as the founder of the Purcell Choir and the Orfeo Orchestra, over the course of his more than 30-year career, the conductor has demonstrated universal interests, performing works from the 19th- and 20th-century repertoire along with early music.