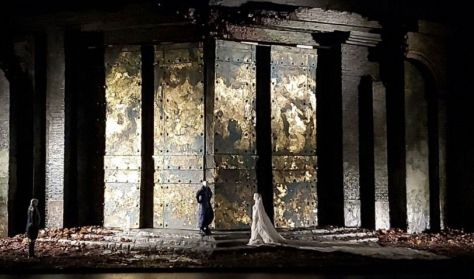 After starring in so many other iconic leading operatic soprano roles, Sondra Radvanovsky will this time take the stage of the Met on this occasion as an ancient sorceress who fears love and is bent on murderous revenge.  more

After starring in so many other iconic leading operatic soprano roles, Sondra Radvanovsky will this time take the stage of the Met on this occasion as an ancient sorceress who fears love and is bent on murderous revenge. Ever since the days of Maria Callas, Cherubini's Medea has been a huge and iconic test for opera divas with a strong dramatic presence, a fact that in and of itself makes this brand-new New York production an exciting one. And especially if we add to this the names David McVicar, the director who always delivers great productions, Carlo Rizzi, the conductor, and Matthew Polenzani, who will portray the unfaithful Jason (Giasone)!

This famous and so tragic story from Greek mythology and later from ancient and classical drama was shaped into operatic form in 1797 by Luigi Cherubini, who after settling in Paris over time became the top musical authority there, and even though his Medea did not exactly enjoy explosive success at its world première, over time it gained respect and even an exclusive place within the repertoire. This is because regardless of whether performed in its original French-language form or in its Italian version with recitatives, the simultaneously incredibly demanding, unusually complex and remarkably reliably bountiful title role regularly impacts audiences in an impressive way. Just such an experience is certain to await the Met's global audience thanks to this Italian-language broadcast from New York featuring not only Sondra Radvanovsky's Medea, who also murders her own children, and the both locally and internationally beloved tenor Matthew Polenzani as the Argonaut of the Golden Fleece, but also the seasoned bass Michele Pertusi, the enchanting mezzo Ekaterina Gubanova, and the rising star American soprano Janai Brugger.

The 'Metropolitan Opera Live in HD' transmissions have been made possible through the cooperation of our partner, liveincinema.eu s.r.o.