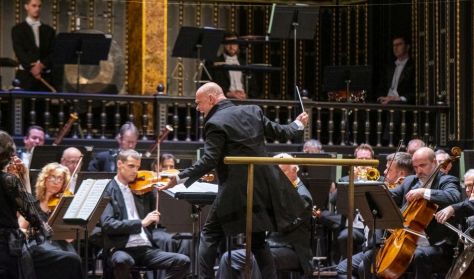 Gergely Kesselyák is widely known for surprising the audience with works of "unknown" composers, for example the Russian composer Alexey Rybnikov, who was born in 1945.

He has composed many soundtracks and a rock opera that had been unknown in his country. He likes philosophical and dramatic themes. The music of his Cello Concerto is tonal (not dissonant), with some very dramatic passages, yet with and ending that represents peaceful passing. The last symphony of Anton Bruckner is a well-known piece, the ending of a great oeuvre. A deeply religious man, Bruckner dedicated this symphony to 'The Good God', and the music is appropriately solemn.

Endre Stankowski is a young cellist and the youngest principal cellist in the Hungarian State Opera Orchestra. Gergely Kesselyák is the first conductor of the Hungarian State Opera, working predominantly as an opera conductor. He has a great flair for performing dramas expressed in music, his conducting is always full of energy and he discovers and reveals features in well-known works that surprise the audience.