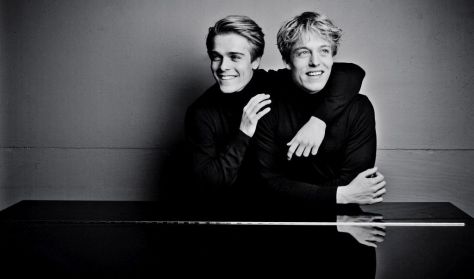 A piece by a contemporary Dutch composer on the program, two Dutch brothers in their twenties playing a piano concerto by Mozart, and one of the indisputable geniuses of West European classical music paying homage to Napoléon, later to an unnamed hero instead.  more

This focused yet diverse program is to be enjoyed nowhere else but at the BFO concert in the Bridging Europe series, a joint initiative by Müpa Budapest and the Budapest Festival Orchestra. The concert opens with a piece by Louis Andriessen, who passed away in July 2021. The composer fixed the rhythm of the music only, while the work is indeterminate as regards pitch or instrumentation. The piano duo of Lucas and Arthur Jussen will play the concerto that Mozart originally composed for himself and his sister. The solemn exclamation point to close the evening is delivered by Beethoven’s monumental ‘Eroica,’ a milestone in the history of music.

“Only in the case that every player plays with such an intention that his part is an essential one, the work will succeed; just as in the political work,” Louis Andriessen wrote in the score of his Workers Union. Workers Union was written in 1975 by the 36-year-old composer, then under the influence of Stravinsky, jazz (primarily boogie-woogie), and American minimalism. The piece can be performed in any arrangement of instruments. The musicians select a middle pitch at their will, and from the score containing a single line they read when they have to play above or below the middle pitch. The result is an utter lack of key and melody – the strict rhythm, however, integrates the entire orchestra.

The two child prodigies, Mozart and his older sister, were eight and thirteen years old when they toured the whole of Europe. These experiences were Mozart’s source of inspiration for the concerto for two pianos, characterized by witty cadenzas, wild dissonances and a brilliant finale. The two soloists are treated as equals throughout the three movements, leaving the inferior role of accompanist to the orchestra. The hardly separable piano parts are performed by the Jussen brothers, who first played this concerto aged ten and thirteen respectively, on the stage of the Concertgebouw in Amsterdam, then they recorded it for Deutsche Grammophon.

Regardless of the dedication to Napoléon, and regardless of the hidden programs invented by fanciful musicologists, what we know for sure is that Beethoven eventually dedicated his Third Symphony, “composed to celebrate the memory of a great man,” to one of his most generous patrons, Prince Lobkowitz. The gigantic, dramatic first movement is full of melodies; even so, the music has a unified atmosphere. The slow funeral march (second movement) deepens the grief of the preceding movement, offering solace with the unexpectedly emerging Scherzo (third movement). The symphony ends in a variational finale, the main subject of which has already been used by Beethoven several times. The movement includes a fugue, Hungarian motifs, and much more.

The heroic King Miklós Kis falls head over heels in love with the most beautiful girl in the world, Tercia…