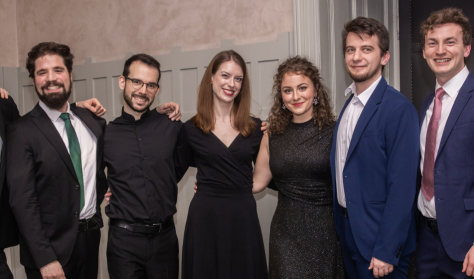 Conducting this special concert for choral music lovers will be the award winner of the Hungarian National Choir’s international conducting course led by Gary Graden, Jack Apperley, who said, “I felt fantastic and gained a lot of new experiences!

Conducting this special concert for choral music lovers will be the award-winner of the Hungarian National Choir’s international conducting course led by Gary Graden, Jack Apperley, who said, “I had a fantastic time and was exposed to many new experiences! I am delighted that the choir voted for me to join them for a concert next season. I am incredibly grateful for this wonderful opportunity and I look forward to making it happen and to when our paths inevitably cross again at some point in the future.”

Jack Apperley will conduct works by such committed composers of choral music – by an Englishman, an American and two Argentines – among whom some are happy to combine singing genres with dance characters, and he is more than prepared to bring these within the framework of church music.

Eric Whitacre (1970) is an American composer who is primarily known for his choral works. He has been Artist in Resident at the Los Angeles Master Chorale since 2016. Carlos Gardel (1890-1935) was a legendary creator of Argentine tango whose name became synonymous with and integral to the genre. Jody Talbot is a remarkably versatile British composer who works with countless different styles and genres. His choral works are among the best known of his creative output. The Argentine Martin Palmeri (1965) is a composer, conductor, chorusmaster, pianist and singer who is equally committed to church music and tango.

Gabriella Busa is a member of the alto section of the Hungarian National Choir and regularly performs operatic roles. The pianist Dóra Bizják has been a répétiteur for the Hungarian National Choir since 2002. As part of the Duo-Klavi-Art with her husband Károly Zentai, she regularly performs pieces for four hands and two pianos. Mihály Demeniv has been playing the accordian since he was four years old. He became known nationwide in 2014, when he won the special prize in the Virtuózok television talent show. The chorusmaster for the concert, Jack Apperley, was a student of the Royal Academy in London and is dedicated to choral music. He has conducted a number of choirs in his career to date and has enjoyed success in several international competitions.